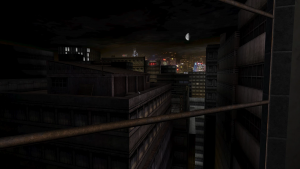 GMDX is a modification for the millennial masterpiece Deus Ex, a game consistently hailed as one of the greatest of all time– yet even masterpieces are not without their flaws.

GMDX seeks to enhance the player experience wherever possible, from gameplay to audio design to graphics, while maintaining strict respect for the original game’s identity and essential design principles. The objective is not to change the fundamental core of Deus Ex, but rather to dig deeper; to more fully achieve and build upon the creative vision put forth by Warren Spector and the Ion Storm Austin team back in 2000.

Experience what is consistently referred to as the “Definitive Deus Ex Experience.” today with the current release, or wait until December for the release of version 9.0.

The majority of GMDX’s goals have already been fullfilled with the previous release version (version 8.0). To get up to date with what GMDX has already accomplished view the 8-part video demonstration series that covers Artificial Intelligence, Audio Design, Graphics, User Interface and more. However in hindsight GMDX was not consistent enough in improving the visual experience, and thus the Enhanced Artistic Direction has been the primary focus of GMDXv9.0, though you can still expect most aspects of design to be improved as usual.

Deus Ex never had the strongest art direction, and it would be a shame if such a magnificent game was overlooked today and into the future because of that.

To see how the enhanced artistic direction is shaping up, and why any such thing is even neccesary to begin with, view the galleries below.

Here’s a short preview of some things we’re changing:

Now on to the Fun Stuff

As already mentioned, the focus of GMDX v9.0 has been in optimizing Deus Ex from a visual standpoint, yet GMDX as a whole is about improving the game in every respect neccessary. You can still expect notable advancement in all the usual categories of gameplay, audio design, user interface, bugfixes, general polishing and more.

Let’s take a look at some of those improvements:

Once again GMDX takes Deus Ex’s artificial intelligence to another level. Expect even more polish, and yet more diversity, including Spiderbots walking on ceilings:

GMDXv8.0 already offers upgraded physics, however, one detail was left behind: when throwing objects no rotational velocity was applied. This is now addressed and is demonstrated below:

Expect more fullfilling augmentations and effects, for example, the vision augmentation now displays in full screen and has additional animated effects, and the cloak augmentation invisibility effects are of higher quality.​

The effect doesn’t translate too well to low quality .gif, but it looks stunning in-game.

​Mantling is considerably improved. To simplify the results, there are two types of mantling:

In GMDX mostly anything can be mantled.

Note: for purism sake, you can disable mantling from the option menu.

The graphical user interface has yet more updates, one such update being new statistics tracked and displayed which reveal current morality, current location, vital signs represented numerically and so on.

If for whatever reason you don’t like it, you can disable it as with many other GMDX features.

GMDX being the most comprehensive Deus Ex campaign mod available seeks to fix every notable flaw present in the orignal game. Most of the work had already been accomplished with the release of GMDXv8.0, however some remained elusive or were overlooked.

This time around the infamous new game inventory bug has been fixed, a number of plot events that potentially break under rare circumstances have been resolved. Projectile-firing weapons are now as accurate as their crosshairs indicate, picking up carryable objects no longer results in issues under certain circumstances and many, many more.

Ladder climbing now cuts the camera to third person perspect….just kidding. Ladder climbing is more fleshed out in GMDX: there is now ladder climbing sound effects, which just like footsteps can be silenced with the silent running augmentation. You can now also jump from ladders by looking away from the ladder and pressing the jump key, different to just normally dropping off of one.

Yes, the removal of content is a marketable element of version 9.0. If GMDX is truly to be the “Definitive Deus Ex Experience”, then it must be the faithful perfection Deus Ex deserves. Additional weapons added in previous versions are scrapped for numerous reasons, gore effects have been toned down considerably, and you can no longer power-throw corpses with the strength augmentation and splat them up walls like tomatoes for comical effect. GMDX is dedicated to retaining the original game’s identity.

Plenty more will be revealed in the coming months. In the meantime, if you are impatient you can download GMDXv8.0 and experience for yourself what players have dubbed the definitive way to play Deus Ex. Click Here

Get the mod from GMDX's moddb page.

Even a little can go a long way.

If you're having trouble, check out our ModDB page for help.